Get Funds for a Farm to School Lunch Program

The current stimulus plan allows funding for reform of the Child Nutrition Reauthorization act. Congress is currently setting the funding for this. The funding can help get better foods for school lunch programs, perhaps even local food from area farms, a farm-to-school food program.

Read more to learn how to make this possible for your school.

To help, contact your U.S. senators and your congressional representative and ask them to seek $20 billion over five years for the Child Nutrition Reauthorization in this year's budget. The budget will be finalized this week.

When you contact them, make sure they know you are a constituent. This is very important as they tend to only respond to constituents. Specify how a farm to school program could benefit your school and why it is important. You can find their contact information at congress.gov.

Second, may schools have outsourced school lunch programs to save costs and many lack equipment in order to prepare better meals. This funding can be used to purchase new equipment like salad bars that make better choices available for kids who need them most.

STIMULUS MONEY FOR SCHOOL KITCHEN EQUIPMENT
The economic stimulus package provides $100 million for school food service equipment grants. Local school food authorities (SFAs) may competitively apply for National School Lunch Program equipment assistance grants. Priority will be given to SFAs in which at least 50 percent of the students are eligible for free or reduced-priced meals.

This will require state-level action. Find your contact here and ask this agency to request in their grant application to set aside some of these funds for Farm to School projects, which will help get fresh, local foods in your school.

Finally, you need to talk to your school and ask them to apply for this funding. Given the current state of things, not too many schools will ignore potential to get funding.

Many thanks for this information to Deb Eschmeyer, Kellogg Food & Society Policy Fellow, National Farm to School Network. 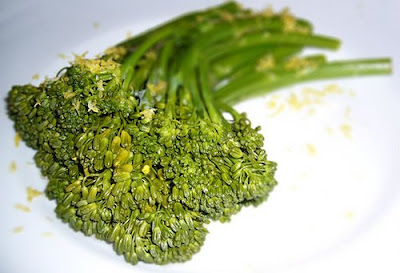 I am currently figuring out how to write a grant for a community project. I have these grand ideas on how big it could be and all these potential ways for it to grow. I forget sometimes that I need to crawl a bit first. Still, it's a great learning experience.

At the same time I am helping with an Urban Farm Tour event for this summer. Thus, I spend a lot more time hanging out in soup kitchens and libraries for these meetings. The urban farmers are inspiring. Some of the programs that they have started are just incredible, like the Refugee garden. It's been a pleasure to work with them.

For the first time, I am starting to feel a very deep sense of connectedness to my community. I am looking forward to the day when I can watch people actually gardening at a community site that I had a small part in helping establish. I hope the project will have some Food Justice elements, as well. There is so much potential.

I am sorry, though, this has all taken me a bit away from the blog and from visiting all of your sites. Kind of like the whole new mom days, I am struggling to figure out how all this new stuff is going to fit in my 24-hour day constraints. I'll get there.

Some good recipes to share soon. Yes, I have still been cooking at least!

No, not looking for the Keymaster. Just some good vegetables and spices, apparently. Today's NYT has a good review of the trend of getting back to the kitchen and just how much influence (up to 70% of all food choices, even while eating out) that this gatekeeper holds.

Plus, a quick quiz to find out just what kind of cook you are. 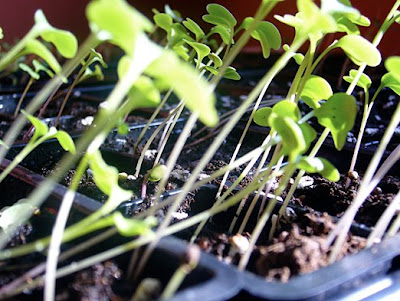 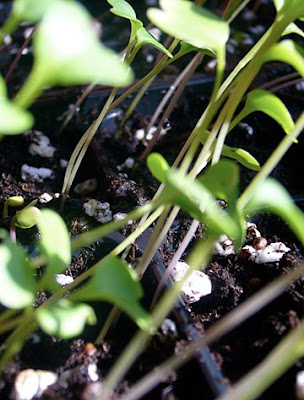 There it is. Our whole garden. Right now, you can't tell the heirloom Romanesco broccoli from the Wild Rocket (arugula), the Siberian Red Kale from the Mesclun lettuces. It all looks pretty much like long-stem clover with only two leaves.

Honestly, I thought I'd killed the lot of it. All 250 would-be vegetables on our table. If they live. But the tiny seedlings proved more resilient than they look. Slowly, slowly, the delicate sprouts come up and begin to reach for the weak winter sun just outside the southern exposure window pane.

We planted all of these, the Kiddo and I, on her birthday. Even more reason to hope for them to thrive.

Ah, that's another problem for a much warmer spring day to come.

Quote of the Day

I want to urge people who are listening that if you have an opportunity, to come by -- not just this soup kitchen but any soup kitchen in your community. And helping is an easy thing to do. Collect some fruits and vegetables. Bring by some good healthy food. You know, we want to make sure that our guests here and across this country are eating nutritious items. Today we had fresh risotto with mushrooms. We had broccoli. We had fresh baked muffins with carrots in it. And my understanding is that this facility is able to provide that kind of meal for about $1.50. And that's an incredible thing to remember: that we can provide this kind of healthy food for communities across this country, and we can do it by each of us lending a hand.

I am waiting to get sick. Every time the kiddo gets a bug from school, I can count on it, too. Because, you see, I don't just get coughed on. No. I get the rollover in the night, power blast of germs not on my nose, but up my nose. All night long. It's one of those mom fringe benefits along with being up every two hours and getting very far behind at work.

Still, the little ones are so sad, so tired, and such a bundle of need, there's no way you could turn your back on them — even when they are coughing. On your face.

So, I wait. Get as much as I can done. And batten down the hatches.