Fair Game: Taking a Bite Out of Invasive Species

This one is cross-posted at Farm to Table.

Sometimes it’s good to channel my rural roots, especially when those hunter-gatherer skills can help save ecosystems. Pull up a chair, grab a beer — or wine if you want to take it upscale — and see what’s on this extreme environmentally-conscious menu.

The recent finding of an Asian carp near Lake Michigan may not seem like news to many, but for those who understand the threat this non-native species poses to the lake’s ecosystem, it’s a big issue.

Asian carp were introduced to this country from China as a way to control algae in fish farms and sewage treatment facilities. With heavy rainfall, the fish were flooded from their ponds in Arkansas and Mississippi in the 1970s. The fish have worked their way north, and now account for up to 80 percent of the biomass in parts of the Illinois River alone.

A single carp can grow up to 100 lbs. in size and is a voracious feeder — consuming up to 40 percent of its body weight daily in the tiny organisms that comprise the base of river and lake ecosystems. They literally starve out the native species.

While $10 million in electric fencing has failed keep the fish out of the Great Lakes, one solution is to attack the fish with a different type of weapon — a fork. Considering the way overfishing has impacted populations of bluefin tuna and other species, the McCarp — and eating to eradication — may not be such a bad idea for once. Ironically, some of the fish are being exported back to China as food.

The main barrier to getting it on the menu here in the states is its bony structure and the name — carp. Most of us who have eaten domestic carp species can tell you: they taste a bit like the name sounds, just reverse the “r” and the “a” in the name.

Thus, the Louisiana Department of Wildlife and Fisheries is currently working with Chef Philippe Parola to create a recipe , literally, for the situation. Parola says the fish, now marketed as “sliverfin,” actually tastes good, like a blend of scallops and crab.

Ready to try, um, Silverfin? Here's some tips and recipes:

Asian carp aren’t the first invasive species to find their way into a Louisiana kitchen. Nutria, a South American rodent once prized for its fur, were first introduced into the bayou in the 1930s by fur trappers. Today, the non-native rodents do so much damage to the marsh ecosystems that the Louisiana Department of Wildlife and Fisheries pays local trappers to hunt and kill the animals. The program has had a lot of success. Original estimates of nutria-damaged wetlands were upwards of 80,000 acres. That estimate is now just over 8,400 — a significant improvement.

What hasn’t been completely successful is a market for the meat, at least for us northerners. Touted as “naturally low in fat and cholesterol,” some Louisiana natives say the braised water rat tastes quite good. While I haven’t had nutria myself, I’m pretty sure it’s better than possum or raccoon — neither of which I personally recommend from experience.

Grey squirrel found its way into UK and subsequently into the local butcher shops when it became a threat to the indigenous red squirrel population both in competition for food and due to the fact that grey squirrels carried a pox that was killing off red squirrels who were not immune to the new disease.

Fortunately, red squirrels have begun to show resistance to the pox and the grey squirrel population “controls” were successful in helping control their numbers.

The large-scale market-hunting approach definitely has drawbacks, like say, near extinction as we’ve learned from whale hunting and the like. Yet, judicious culling of an invasive species is sometimes necessary. Especially when there is no danger of that species becoming extinct — at least not judging from my own backyard population and garden damage. And, if you really want to be “green,” wasting the meat that results is, well, wrong.

For a period of time in 2008, in fact, squirrel was quite the trendy UK menu item, the most favorite dish being Squirrel Pasty. While I have to disagree from personal experience with the description of the meat as being “a cross between lamb and duck,” it tastes far more similar to lean rabbit, which is pretty good. Even celebrity chefs like John Besh have prepared the free-range rodent. His pick is “Squirrel Gumbo.”

Here's some appropriate recipes in case you find yourself out hunting. And, no, it's not legal to shoot the ones in your garden when you live in suburbia. Tempting, but not recommended. 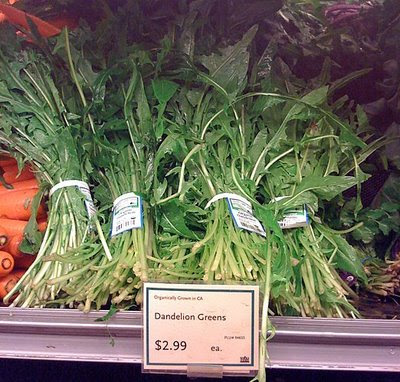 If you find you are more of a gatherer than a hunter, you can still do your part to enjoy the culinary rewards of “invasive,” but local, species in your own backyard. Just remember that Roundup does not make good salad dressing. So, if you spray, skip the yard buffet.

For those who have resisted yard chemicals and weed the old-fashioned way, you’ll be happy to know that there are edibles in them thar hills. The most common one we can all identify is likely the dandelion. I got a pretty good giggle when I saw these on sale at Whole Foods for $2.99 a pound. Obvious uses are salad greens.

Another tasty and lovely “weed” is pigweed, or the better name, amaranth. Some species are really not a weed at all, but a source of grain. Other varieties have edible leaves, which have a pleasant earthy taste and are commonly consumed by some Asian cultures.

My favorite weed is the edible variety of purslane. Succulent, tangy and seriously one of the healthiest plant sources of Omega-3s, this one should go on your must forage list.

Be sure you know your “weeds” before the harvest, however. Many plants in the backyard are toxic, like decorative plants including hydrangeas and certain lilies. Here’s a few tips on a few of the plants you and your kids and dogs should avoid eating.

Ready for those wild greens? Here's some recipes:

Obesity rates rise for 28 American states according to the Trust for America, Robert Wood Johnson report, “F as in Fat: How Obesity Threatens America’s Future 2010.”

Here's some of the facts.

Meanwhile, KFC's Double Down, Wendy's Baconater, Friendly's Burger "sandwiched" by two grilled cheese sandwiches, and Sonic's foot-long chili-cheese coney is now joined by Hardee's foot-long cheeseburger.
From a business perspective, this is really a short-term "gain," right? Once they've killed off all the customers, maybe they'll have to switch to salads.
I really can't wait for this obscene and repulsive trend of excess to die off like the fat-clogged aorta it is. But it will only stop when people stop buying it. Hey, if you can't stop for your own health, how about the environment?
Posted by ExpatChef at 17.7.10 1 comment: 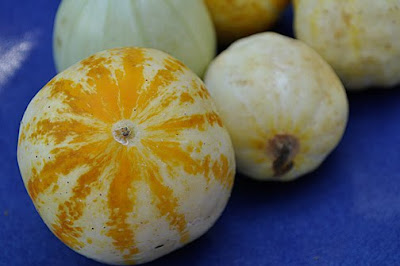 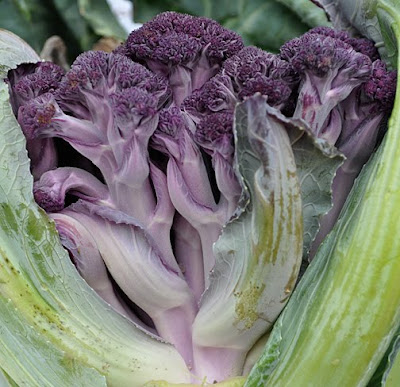 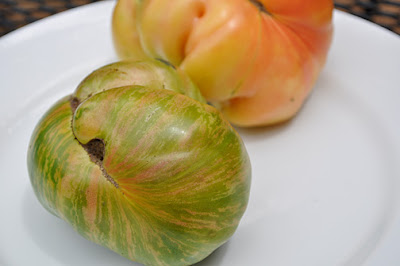 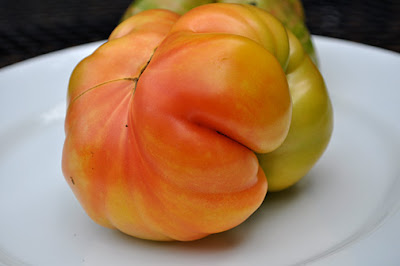 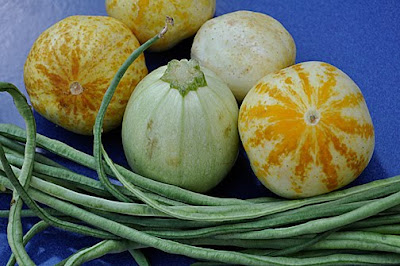 Even when I am tired from a long week, the farmers market calls to me. I try to ignore the overflowing tables of beautiful produce. I don't feel up to cooking, I think.
But then I smell an Athena melon and I know it's going to be the best I will have all year. The first blackberries are in, Some so ripe, the berries are about to burst.
From the corner of my eye, I glimpse purple cauliflower peeking between the green leaves. Yellow-striped, lemony cucumbers that I have yet to try end up in my basket. The very last bunch of purple asparagus I will see for a year is too big a prize to pass up.
Heirloom tomatoes in brilliant stripes, salmon-pink ones, green stripes, all rainbow hues will not let me ignore them either.
Even my own haphazard garden mocks me that day by bringing forth long beans — a favorite type of Asian green bean. I harvest a pound of these, and even find myself angry at the rabbit who stopped to eat half of one.
I contemplate a bit of hunting and a few rabbit stew recipes for a moment. Then, I go in, and find I am no longer too tired to cook.
Marinated Long Beans
Dressing:
1 shallot, minced
1/4 cup soy sauce, tamari
1/4 cup rice wine vinegar
2 tbs. sugar
1 tsp. minced ginger
1/4 tsp. Oriental mustard powder
pinch red pepper flakes
3 tbs. canola oil
1 lb. long beans, chopped to 1" pieces
1 lb. asparagus, chopped to 1" pieces
(you can use all green beans)
1/3 cup sesame seeds
Mix the dressing ingredients and set aside to marry the flavors.
Boil water, add the beans and asparagus and blanch for 2 minutes. Strain the water and put the vegetables into ice water to stop cooking and set the color and crispness.
Toast the sesame seeds in a dry skillet over medium heat, tossing to keep them from browning unevenly. About 5 minutes.
Combine the dressing, vegetables and sesame seeds. Chill at least 2-4 hours before serving. 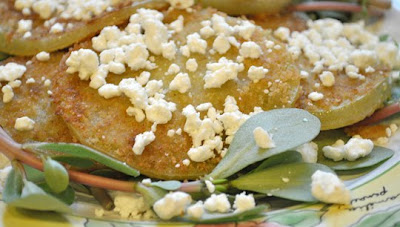 The best thing about just before tomato season and just after? Fried Green Tomatoes. I saw the movie ages ago and always wondered why you would want to eat a unripe tomato — until I tried one. This take is a quick pan-fried version. Less oil and mess and a lighter approach.

I had just gotten our first-ever batch of purslane from our remarkable CSA, so it seemed like a good way to combine the foods. Purslane is a succulent that normally grows wild. It is high in Omega-3s, so a great, healthy green to explore. It has a crisp, citrus-tart flavor and a nice texture. You can eat the stems, which are not woody at all.
I found myself in the unique position of cooking just for me one lunch. Kid was fed, spouse asleep. So, this creation was just the thing for a light lunch.