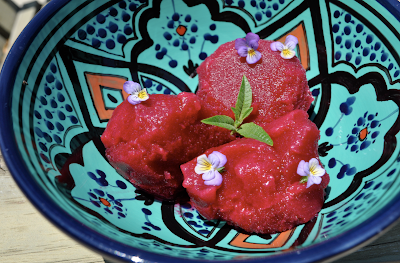 The solstice came and went, it's oddly light outside before six am and blessedly light for enough hours at the end of the work day for me to water the garden and weed a bit. Of course, this also means it's hot. Hot weather and long, extended sessions in the kitchen don't mix, so we've been taking our veggies cold these days.

The kiddo gave this recipe a sidelong glance at first. But then she drank two glasses of it. We, of course, finished the meal by having a competition to see whose tongue was the most pink. (I won. I like beets). Oddly, I made the sorbet recipe for a dinner with adult friends and we did the exact same thing. I can blame the wine for that one, though!

Cool kitchen tip: Roast a whole bunch of beets, garlic, or any other long-cooking veggies all at once in an evening. Allow them to cool and store in the fridge for use throughout the week. I do any blanching and shocking of green beans, asparagus and boiling potatoes at the same time, too. Then, during the week I have chilled veggies to put on salads for quick, no-heat required dinners and smoothies.

You need a hard-core blender for this, one that does frozen desserts. If you don't have this, you can dice up the beets and go slower in smaller batches, OR you can just use 3 cups water instead of the ice. You'll need to then pour the mixture into an ice cream maker. Place the mixture in the freezer if you are not going to use right away. You may have to thaw it a bit to serve later. Serves about 10 1/2 cup scoops.

I love this recipe because it finally gives me an easy way to use those beet greens when I use the beets, too. They add some good nutrition to the mix as well. Bonus! Place items in the blender from liquid to the ice (easiest to hardest) to give your blender a fighting chance. Blend well. Serve. Compare tongues and chill as in you chill, not the drink. Serves 6.

Smoothie or Juice?
It seems like everyone is "juicing" these days. I've seen several people at work, proudly drinking a murky gray drink in some kind of blender cup and announcing how much they love their cleanse. I don't want to hear about your cleanse. That's between you your lower intenstine alone. Really.

The big difference between the two is that juicing removes all the fiber and solid matter from the fruits and vegetables in the mix. Smoothies just kind of grind it all in. Smoothies can have a bit of a texture like orange juice with the pulp. If that bugs you, then you might prefer to juice. The absence of fiber in the juice does lead to a few warnings to start slowly on that cleanse. Again, I don't want to know. Given that the average adult in America eats only 15 of the 25-38 grams of recommended daily fiber, I'll take the smoothie.

Further, the fiber in the smoothie can help moderate the uptake of the sugars in the drink, slowing the glycemic load a bit. Juice is pretty much a straight spike in your blood sugar. Juicers also remove the peels along with pulp. Fruits like apples have most of their nutrients near the skin as well as much of the phytonutrients. So, smoothies are better for nutrition content, too.

Just Dip It: Kids eat up to twice as much vegetable when served with a flavored dip

Researchers just confirmed what every mom armed with a bottle of ranch dressing will tell you: Dips do make kids eat their vegetables. Even though we had already tested this theory over a thousand carrot sticks and red pepper strips ourselves, I do like seeing some validation that kids will try more vegetables, eat more of the vegetables and be twice as likely to enjoy those veggies with a dip.

Since only ten percent of four-to-eight-year-olds eat their five-a-day as it is, it's just really nice to read about kids eating vegetables at all.

Two other important keys to the research; repeat exposures are still the most effective way to get kids to try vegetables. Also, small portions that encourage trial instead of intimidating help kids get past their veggie-phobia.

Wait. Before you reach for the Costco-sized bottle of that commercial ranch dressing — many of which contain MSG, artificial flavors, preservatives and genetically-modified oils — think again. Its easy enough to make your own dips and dressings, many of which can be made with more vegetables!

Here's recipes for some of my favorite dips and dressings.