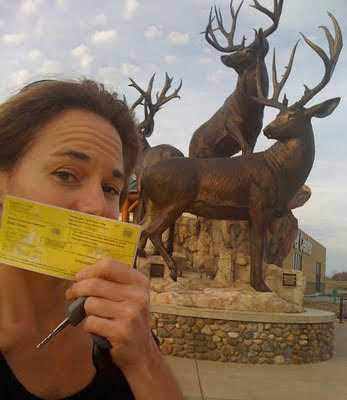 I am about to tread into controversial ground. In hunting boots.

Anytime you bring up “meat” in sustainable circles, that single word brings to mind a hundred issues. First, it is the least environmentally-friendly food group as we currently produce it, and is too often associated with food-borne pathogens as a result of factory farm and industrial-scale slaughter practices.

But beyond that is a deeper issue, a vestigial primal instinct within that perhaps we civilized humans would rather not acknowledge. Meat must come from an animal. That animal is killed to provide it. Consumers are too far removed from this fact. We don’t buy a cow. We buy sirloin in neat, sealed packages. Or, we get a double-cheeseburger in a box through a window.

How would we feel about meat if it were not so easy? What if the first step in that roast recipe was "Pull the trigger?" I decided to find out for myself.

Well, not all by myself. Each year, millions of hunting permits are issued, and 16 percent of those are now issued to women — a 72 percent rise in women hunters overall. Many of those women are taking to the woods not for a trophy — despite the novelty I would enjoy of finally having a “nice rack” — but to feed their families during a tough economy.

While hunting isn’t sustainable as a food source for every household in our nation, it is an important activity for the overall management of the deer population. With the reduction of natural predators, the deer population has risen from an estimated 500,000 nationwide in the 1900s to 25 to 30 million currently. Deer overgraze on young trees, reducing habitat for other species and cause deforestation.

Each year, the overpopulation of deer cause hundreds of millions in damage to agriculture crops, $60 million in New York state alone, and an estimate $750 million to the timber industry nationwide as well. Without enough habitat, deer end up living in close proximity to populated areas, resulting in 1.5 million “car vs. deer” accidents yearly. A current program in my own state opened up hunting in a local park due to fears that the overpopulation of deer — an estimated 200 per square mile — would result in a significant spread of Lyme disease.

Armed with these statistics to bolster my conscience, and a .30-30, I headed to the woods with two friends, both seasoned hunters, and both very patient with a novice. Deer hunting is not that easy, actually. You can invest days of time and end up eating mac-and-cheese if you were counting on venison. Or, in earlier days, going without.

My friend had spent hours scouting on his land, putting up deer stands, even planting milo and fruit trees to feed the deer for the coming harvest. Compared to the lifestyle of feedlot beef, these deer have it far better — and are killed more humanely by a skilled hunter.

Skill being the operative word. If you are born after 1966, you are not required by law to take a firearm safety course in order to get a hunting license, even though you should. This is a good idea not just for the deer, but your fellow hunters. As a matter of conscience, you should also know how to aim the rifle and shoot well for the least suffering of the animal. This means time to practice.

You are also required to know the laws in your state that determine the size and sex of deer you are allowed to shoot. It may seem ironic, but all the hunters that I know are advocates for conservation of wildlife. Hunting license fees are also a major source of revenue for each state’s conservation department.

And, you are required to get up way before dawn and freeze your butt off in a deer stand for hours, days even. All in hopes of that moment when you hear the crashing in the woods of a large buck, your heart pounds, you check to see if he is of legal size, yep, you raise the gun and aim, contemplate this moment of life and death, then wonder, “Did we remember at 4 a.m. to put a round in the chamber?”

Then, your moment is gone and so is the deer. And, you end up firing that round off trying to put your old school .30-30 back on safety. No deer, but I sure did nail that tree branch below. I just don’t know how to cook it.

Hi Beth - still love your blog. We have a deer stand, but I won't be sitting in it any time soon, thanks to a family rule: you kill it, you clean it. Good luck to you though! Best, Anne