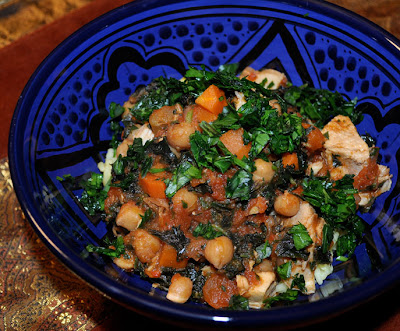 I went to lunch a couple weeks ago on a cold, gray day with the last snow still deep on the sidewalks and side streets. We went to restaurant here that was doing locally-sourced ingredients long before it became fashionable. The place had a history of ethical and good food, as well as creative vegetable dishes. However, they have had some ups and downs with the chef having to attend to family issues, so often the food can be hit or miss.

I'm loyal in this regard. I give the place every break I can and have faith this too, shall pass. So, I try to keep going there when I can.

The daily special on the menu was for a chickpea and tomato Moroccan stew. The idea of the stew invoked warm, earthy spices and a hearty, but healthy, and filling meal for one of those gray early spring days where winter seems to keep a firm grip of cold right on your lower back.

When the dish arrived, it was not everything I had hoped for. The chickpeas were undercooked and the dish consisted of just those, tomatoes and plain rice. I paid extra for the roasted chicken on top and was glad I did. I could not detect any hint of spices or the complexity I envisioned.

My lunch companion, someone who knows more about food than I ever will, asked me if it was good. We were the only ones in a very quiet restaurant with the waitress hovering. "It's okay," I said.

In my head, I was rethinking this dish. We left the restaurant with me still craving the warm, earthy stew I had hoped for. No surprise that I made my own version that very weekend.

This is the dish. I used the opportunity to hone my skills with the pressure cooker, the latest kitchen gear I am trying to master. But, you can make this dish without one, just triple the cooking time for the dried chickpeas, lid on, to 1.5 hours. Seriously, triple the time. All the more reason to learn how to use the cooker thing, right?

2 large cloves of garlic, minced
1 large onion, diced
1 tbs. olive oil
1 28 oz. can of chopped tomatoes with juice
1 cup dried chickpeas
2.5 cups vegetable or chicken broth
2 tsp. cumin
2 tsp. coriander
2 cinnamon sticks
4 carrots, peeled and diced
1 red pepper, seeded and diced
1 bunch kale, chopped and tough stems removed
1 bunch parsley, chopped
1/2 tsp. salt
black pepper to taste
1/2 roast chicken, skinned and boned
Heat the olive oil in the pressure cooker, lid off. Sweat the onion, carrots, red pepper and garlic for about ten minutes to release flavor. Add the spices, saute for a couple minutes. Then, add the chick peas, tomatoes and juice, cinnamon sticks and the chicken broth. Bring up to a simmer. Then, lock on the pressure cooker lid (following manufacturers directions to avoid any, you know, explosions of vegetables all over). Cook, with a steady, but not forceful steam escaping the top (again, read the manual). Cook for 30 minutes.
This is a good time to prep and make rice. Since I think every element can add to a dish, I used 1 cup of basmati rice, 2 cups of chicken or vegetable stock and a pinch of saffron. Placing all in a pot, cover, bring to a boil, reduce to a simmer. Should be done in 20 minutes. Just turn off the heat and let rest while you finish the stew.
Remove the pressure cooker from heat and set to natural release. The process will vary a bit with every type of pressure cooker. Basically, when the pressure is released, it's safe to open the pot. When you can do this, add the kale, place the pot unsealed and uncovered over medium low heat and simmer for 10 minutes. Add the parsley, salt and pepper to taste.
Remove the cinnamon sticks, and serve over rice, topping with the roast chicken. Feta cheese is another nice garnish here, but the flavor is rich enough with it.
Posted by ExpatChef at 12.3.11

Your dish passes on the inspiration!

Did you know that you can cook your Basmati rice in the pressure cooker, too? Well, that's assuming you have two!

Same 2:1 ratio. Bring to pressure for one minute then turn it off. Let pressure come down naturally. Done!

I picked-up this method on an Indian blog - and they should know how to pressure cook Basmati rice!!

Great recipe, love the colors, where on earth did you get those great plates... Morocco.