The Seeds We Plant 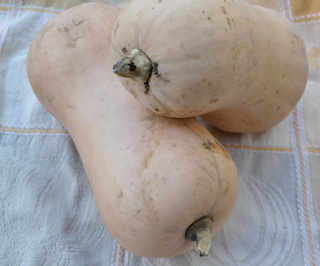 I chose the seeds carefully. In the dead of last winter, the beautiful vegetables filled the pages of the seed catalog, all whispering a promise of the growing season to come.

That promise seduces me each year. It tricks me into the hope that, this year, yes, this year, I will grow a beautiful garden. I chose lettuces for spring. Green beans and Asian beans also because these seem to defy even my black thumb and produce. I chose a few "experiments," ones I had little hope of actually growing to fruition, but would be oh so amazing if I could. And I chose a winter squash, Delicata, because I love winter squash most of all vegetables. Each year, I try to grow it and fail, but try again the next.

Before hitting "purchase," I quickly doubled the seed order for the most hearty items. I chose the things I knew most people would know how to cook. And I picked a butternut squash seed for the mix. This second order of seeds was not for my garden. Each year, I donate seeds to a prison garden program where the inmates volunteer their time and labor to grow food that gets donated to area food pantries.

By late May, however, the season's early promise began to look ominous. It was hot. And dry. June came in like July. Strawberries barely lasted two weeks and blueberries were ripe in June. We had to water a few times a week. Late June saw temperatures of over 100 degrees.

The drought was here. I fought the good fight. I watered. My husband watered. The kid watered. I hoped the cat did not water. We watered. I cursed the population explosion of bugs from our too-mild winter. I did my rookie best. And I faithfully planted my fall crop of winter squash and hoped.

But the heat pounded us all, plant, human and animal alike. We all wilted together. My beautiful squash vines shriveled and the leaves turned brown. I'm not a great gardener, even when there is no drought. I was even more humbled now. I really wanted my seeds to grow and to cook squash I had grown myself.

Just about this time, our neighbor knocked at our door. She's like another grandmother to our little girl. The two are best friends. We sometimes take her soup and chocolate-zucchini muffins. She stood at our door with empty soup containers in her hands and a sack.

"Do you like winter squash?" she said. Inside the bag were three butternut squashes. "My boyfriend helps volunteer with this prison garden project," she went on. "And they had so many extra squash, they sent these home with him." She had no idea that I donated seeds to the same program.

"Thank you. Thank you so much." I said. It was hard to put into words what I felt holding the squash that may very well have been grown from the seeds I donated. I guess gardening really is like life.

It's not only what you harvest that matters. It's just as much about the seeds you help others to plant.

Below is a note I received from the coordinator of the garden. It was written by one of the garden's inmate volunteers. 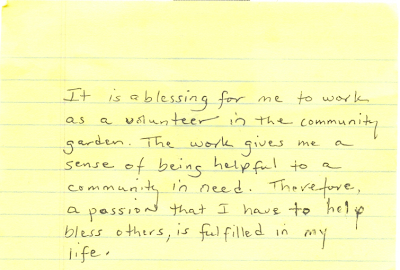 Their season was not without hardship.

"End of July update,
Well mother nature still will not cooperate and send us some much needed rain, and lower than 100 degree temperatures.  We have used almost all rain water we can, but when it doesn’t rain our rain barrels cannot collect rain water from the roof.  We have been able to pump some water out of a pond, but it is getting low.  We did plant this week some fall crops, so we again need some prayers for rain.  Most everything is 1/3 of what we had for production last year.  And many plants have quit producing and have died.  From May 15 to July 31 we have given away 39,906 lbs of food to those in need, as compared to last year of 58,653."

Still, nearly 40,000 pounds of food went to those in need. Next season, I am tripling my seed order. If you'd like to also contribute, email me at thecleanerplate [at] gmail [dot] com. I'll get you the contact information for the garden coordinator.

Or, if this post moves you to action, find a similar project or community garden to donate to for your area. Fresh produce is one of the most cherished items that a food pantry can get. Healthy foods are a premium.

Every tiny seed of good we plant in this world grows. Every one.