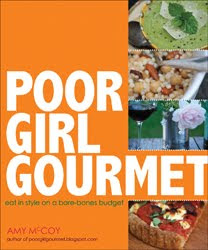 I'll be giving a few books to family and friends this year. They don't read the blog, I think, so the secret is safe with just us.

The Brisket Book
For my brother-in-law who believes that the four food groups are beef, pork, seafood and, well, whatever else is on the table, we'll be serving him The Brisket Book, A Love Story by Stephanie Pierson. We eat only grassfed beef, so the recipes in here work well for leaner meats, think arm roasts and rump roasts, too. The book has a lot of detail and background on cooking methods and gathers recipes from various chefs, barbecue champs and home cooks.

We tried the Class Braised Beef Brisket recipe, which, is the one recipe in the book, I think, that needs a few more details. First, the oven temperature is notably absent, (refer to the front section that discusses braising method and choose the lower temperature and longer time option). Second, the spice crust has a lot of salt in it, when you go to reduce the liquid from cooking into the sauce later, it's way too salty. Either use half the salt in the rub, or thicken the pan sauce with a slurry or roux. Reducing it only intensifies the salt.

For my niece in college with her first apartment, learning to cook, there will be three books wrapped up. Her brother kids her that she can boil water, but can't make the pasta even on a box of Mac and Cheese. For her, Robin Takes Five, 500 Calories, 5 ingredients or less, 500 calories or less, five nights a week, 5 pm. It's a good set of basic, fast and healthy recipes that are not too complicated for a new cook. They are not boring recipes, which is a pleasant surprise given the five ingredient limit. Chinese Five-Spice Roasted Chicken with Mandarin Duck Sauce, and basics like Spinach and Feta Turkey Burgers are healthy, but tasty 500-calorie meal options.

Once she gets some confidence, her next book to dive into will be Poor Girl Gourmet, Eat in Style on a Bare Bones Budget. I cooked a lot with my roommates in college, it became like a second family. Learning to eat well on a budget is also a lifelong skill that will be very handy. Rigatoni with Roasted Butternut Squash, Sweet Italian Sausage, and Fried Sage is way sexier than anything that came out of our college apartment kitchen, except perhaps Richard's Monster Cookies he would bake when he got sick of us girls dieting too much. I hope my niece has as many good memories and good friends from her college experience as I do. Sharing a meal sure helps that sense of a second family.

She's also going to get Grilled Cheese, Please! so she can start with the basics and eat well without being intimidated. There's some good basics like Cubano and Monte Cristo in here and a lot of ways to eat vegetables. My niece does not eat a lot of veggies, so putting them between crisp bread with good cheese may be a whole new idea that works for her. I hope she'll explore new foods, too, like the Arepas with Black Beans and Plantains "grilled cheese."

Of course, I will also be wrapping up a copy of The Cleaner Plate Club for my niece. After all, her aunt wrote it. She's kind of under obligation to get that one.
Posted by ExpatChef at 11.12.11