I know, it's like sacrilege. But something has to temper my love affair with butter fat for this holiday. The kid will pick and choose her healthy bites, however. Brussels sprouts more loaded with bacon and aged Gouda, YES. Brussels sprouts with quinoa and just enough bacon to taste good? Hmmm, more for me at least. It is a tough sell after a couple weeks of Halloween sugar binge have ignited her inner hummingbird (SUGAR! SUGAR!). So, I will eat my vegetable test recipes and be happy I can eat fibrous vegetables again now that pesky gallbladder was forcibly evicted.

As for the kid? I am calmly reminding myself, two steps forward, one step back. She is also coming into the age of wanting control in her food choices. This is the point where I hope that we've laid some groundwork and she knows good choices. I have to let go and step back a bit. I have to use approaches like "Build Your Own Salad" night and let her choose recipes and start cooking more.

And eat my Brussels sprouts while I do.

It is kind of amazing that one of the most loathed vegetables ever is now quite sexy along with its Brassica cousin, kale. This is one of the things I remind myself on the "one step back" days with my own kid. She eats more veggies — and a much wider variety of them —than I ever did at her age. 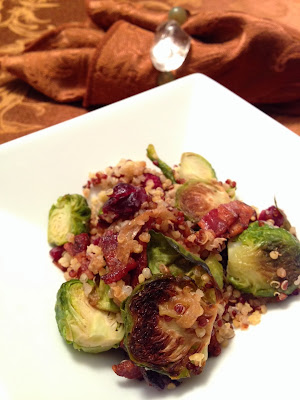 Brussels Sprouts, Light on the Bacon, with Quinoa

Preheat the oven to 375 degrees.

Toss the olive oil and Brussels sprouts and roast for about 10-12 minutes, or until golden brown on edges. While the sprouts are roasting, render the bacon in a skillet. When just done and not too crisp, add the onion and sauté until caramelized. Add the vinegar to deglaze the pan, then add the honey and craisins, stir as it thickens for about two minutes. (If you are concerned about using the bacon drippings, drain the fat and replace it with a tablespoon of olive oil.)

Toss the sprouts with the quinoa and the bacon-onion sauce. Salt and pepper to taste. Enjoy for your holiday meal while I wonder how my annual pie/dessert recipe has become a Brussels sprout one instead!

Here's last year's Smoked Brussels Sprouts with Roasted Apples. Here's a few healthy sides for Thanksgiving. And, some desserts, too.
Posted by ExpatChef at 23.11.13